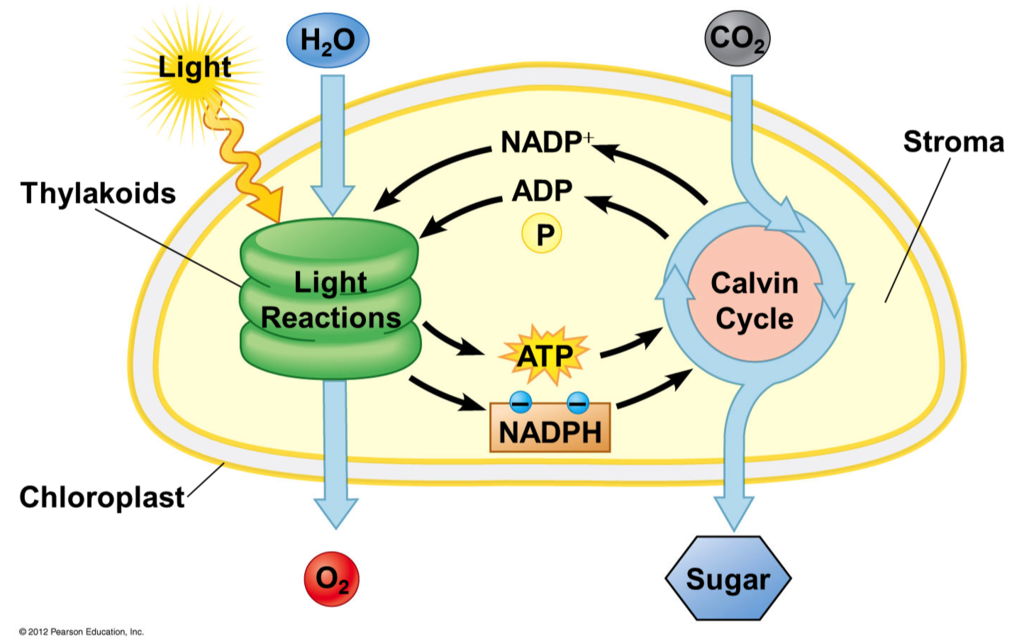 The Calvin cycle is the cycle of chemical reactions carried out by plants to “fix” carbon from CO2 into three-carbon sugars.

Plants and animals can later convert these three-carbon compounds into amino acids, nucleotides, and more complex sugars, such as starches.

This “carbon fixation” process is how most new organic matter is created. The sugars created in the Calvin cycle are also used by plants for long-term energy storage, unlike ATP, which is rapidly depleted after its creation.

These plant sugars can also become a source of energy for animals that eat the plants and predators that eat those herbivores.

The Calvin cycle is also sometimes known as the “light-independent” reaction of photosynthesis since it is not directly powered by photons from the sun. Instead, the Calvin cycle runs on ATP and NADPH, which are created by harnessing the energy of photons in light-dependent reactions.

The function of the Calvin cycle is to create three-carbon sugars, which can then be used to build other sugars such as glucose, starch, and cellulose that are used by plants as a structural building material. The Calvin cycle takes carbon molecules directly from the air and converts them into plant matter.

This makes the Calvin cycle vital to the existence of most ecosystems, where plants form the base of the energy pyramid. Without the Calvin cycle, plants would not be able to store energy in a form that herbivores could digest. Carnivores would subsequently not have access to the energy stored in herbivores’ bodies! The carbon skeletons created in the Calvin cycle are also used by plants and animals to make proteins, nucleic acids, lipids, and all the other building blocks of life.

The Calvin cycle also regulates the levels of carbon dioxide, a greenhouse gas, in the Earth’s atmosphere. Scientists have raised concerns that, in addition to putting huge amounts of CO2 back into the air by burning coal, oil, and gasoline, humans have also cut down about half of all of Earth’s forests, which play a major role in removing CO2 from the air.

In carbon fixation, a CO2 molecule from the atmosphere combines with a five-carbon acceptor molecule called ribulose-1,5-bisphosphate (RuBP). The resulting six-carbon compound is then split into two molecules of the three-carbon compound, 3-phosphoglyceric acid (3-PGA). This reaction is catalyzed by the enzyme RuBP carboxylase/oxygenase, also known as RuBisCO. Due to the key role it plays in photosynthesis, RuBisCo is probably the most abundant enzyme on Earth. 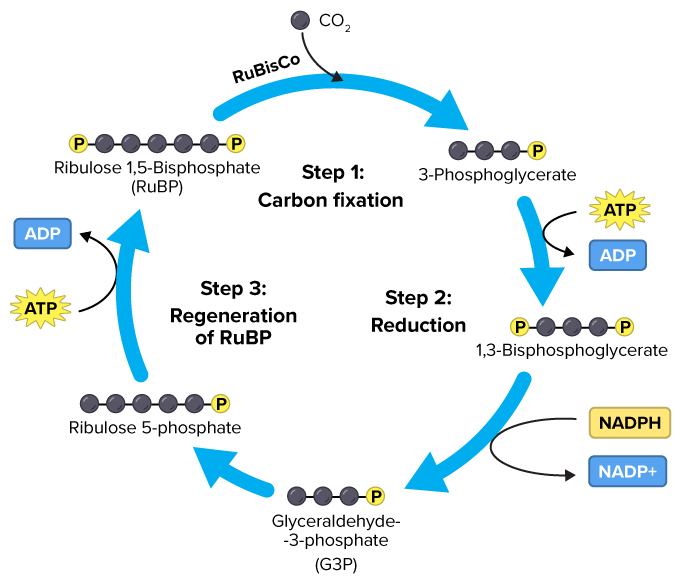 In the second stage of the Calvin cycle, the 3-PGA molecules created through carbon fixation are converted into molecules of a simple sugar: glyceraldehyde-3 phosphate (G3P). This stage uses energy from ATP and NADPH created in the light-dependent photosynthesis reactions. In this way, the Calvin cycle becomes the way plants convert energy from sunlight into long-term storage molecules, such as sugars. The energy from ATP and NADPH is transferred to sugars.

Some glyceraldehyde-3 phosphate molecules are used to make glucose, while others must be recycled to regenerate the five-carbon compound RuBP that is used to accept new carbon molecules. The regeneration process requires ATP. It is a complex process involving many steps.

Because it takes six-carbon molecules to make glucose, this cycle must be repeated six times to make a single glucose molecule. To achieve this equation, five of the six glyceraldehyde-3 phosphate molecules that are created through the Calvin cycle are regenerated to form RuBP molecules. The sixth exits the cycle to become half a glucose molecule.

Products of the Calvin cycle

Each turn of the Calvin cycle also uses 3 ATP and 2 NADPH in the processes of reducing (adding electrons) 3-phosphoglyceric acid to produce glyceraldehyde-3-phosphate and regenerate RuBP so they can accept a new carbon atom from CO2. from the air. This means that to produce a single glucose molecule, 18 ATP and 12 NADPH are consumed.