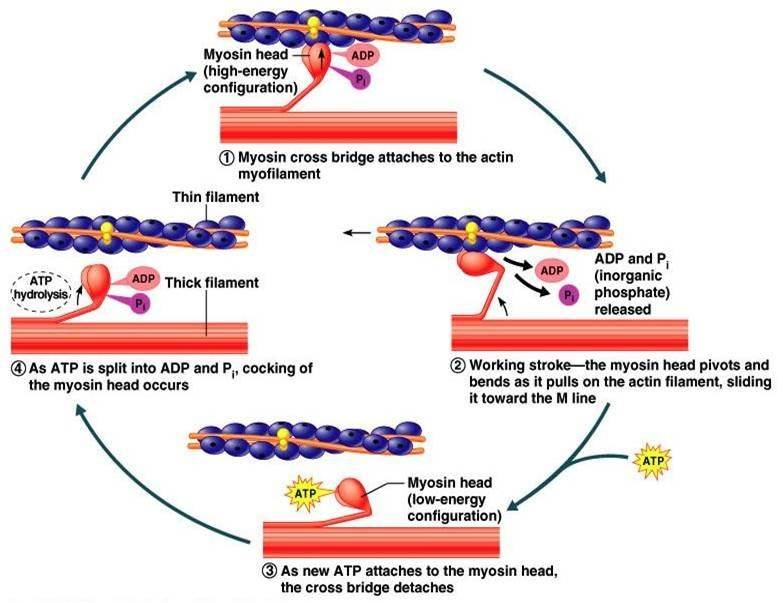 ATP is critical for muscle contractions because it breaks the myosin-actin cross-bridge, releasing the myosin for the next contraction.

The muscles contract in a repeated attach-and-release pattern between the two thin and thick strands of the sarcomere. Breakdown of ATP during contraction is critical for preparing myosin for binding and for „recharging” myosin. 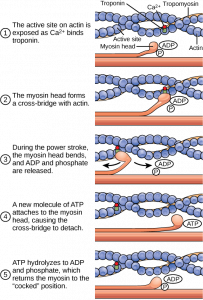 ATP first binds to myosin, bringing it into a high-energy state. ATP is hydrolyzed into ADP and inorganic phosphate (Pi) by the enzyme ATPase. The energy released during ATP hydrolysis changes the angle of the myosin head to a „mounted” position, ready to bind actin if the sites are available. ADP and Pi remain bound; myosin is in its high energy configuration. The cycle of muscle contraction is triggered by the binding of calcium ions to the troponin protein complex, exposing active binding sites on actin.

As soon as the actin-binding sites are uncovered, the high-energy myosin head closes the gap, forming a cross-bridge. Once myosin binds to actin, Pi is released and myosin undergoes a conformational change to a lower energy state. As myosin expends energy, it moves through the „power stroke,” pulling the actin filament toward the M line. When actin is pulled about 10 nm toward the M line, the sarcomere shortens and the muscle contracts.

At the end of the power stroke, the myosin is in a low energy position. After the power hit, ADP is released, but the cross-bridge formed is still in place. ATP then binds to myosin, moving myosin to its high-energy state, freeing the myosin head from the actin active site. ATP can then bind to myosin, allowing the cross-bridge cycle to begin again; increased muscle contraction may occur. Therefore, without ATP, the muscles would remain in their contracted state, rather than their relaxed state.